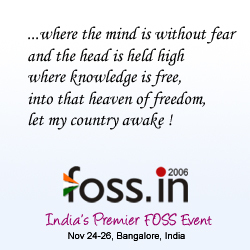 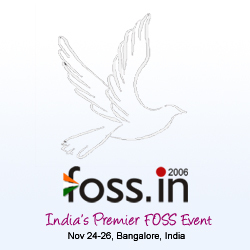 FOSS.IN is one of the world’s largest and most focussed FOSS events, held annually India. Over the years, it has attracted thousands of participants, and the speaker roster reads like a “Who is Who” of FOSS contributors from across the world.

FOSS.IN/2006 will be held on November 24-26, 2006, at National Science Symposium Centre of the Indian Institute of Science in Bangalore, India.

Do check out the other details at foss.in